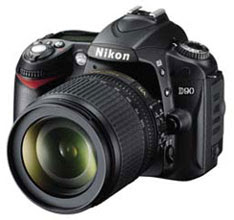 Nikon's newest mid-range DSLR offering is the D90, which features a 12.3-megapixel DX-format CMOS imaging sensor, continuous shooting up to 4.5 f/p/s, which is complimented up by an ultra-speedy 0.15ms power-up time, and an all-but-zip shutter lag time of a scant 65-milisecond.
The new D90 also packs a whole lot of trickle-down technologies formally exclusive to Nikon's pricier D3 and D700 DSLRs including an EXPEED image processor, low-noise imaging from ISO 200 through 3200, a 920,000 dot 3" LCD for true high-definition image viewing, a 4-frequency ultrasonic sensor cleaning system, an 11-point AF system with Face Priority and Nikon's Scene Recognition System, and dead-nuts accurate metering courtesy of Nikon's field-proven 3D Color Matrix Metering II.
Easy Live View can be called into play with the touch of a button, and can be used
in three focus modes including Face Priority.
For motion picture fans, the D90 features a D-Movie mode, which captures 24 f/p/s HS video clips at up to 720p (1280 x 720 pixels) in motion JPEG format.
Other features of the Nikon D90 are auto or selective D-Lighting for optimizing shadow and highlight details under the most extreme lighting conditions, Red-Eye Reduction, Image Overlay, in-camera Straightening and Distortion controls, a monochrome mode, and an optional GP-1 GPS unit for identifying the exact locations of all the places you went 'click'.
The Nikon D90 is available as a body-only, or with an AF-S DX Nikkor 18-105/3.5~5.6G ED VR lens, which covers the field of view of a 27-157.5mm lens on a full-frame 35mm DSLR.
The Nikon D90 will be available the second week of September, and we plan on publishing a hands-on road test with the new camera in an upcoming newsletter. 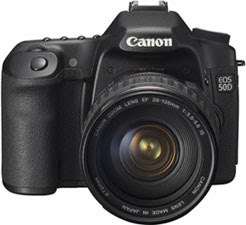 Canon EOS 50D
Canon's newest entry into the fall season Olympics is the EOS 50D, which sports an impressive 15.1-megapixel APS-C format CMOS sensor that takes full advantage of Canon's new DIGIC 4 image processor.
The EOS 50D can knock out up to 90 Large/Fine JPEGS or 16 RAW images at burst-rates of up to 6.3 f/p/s. If you often find yourself shooting under low-light conditions, the new camera can be set for ISO ratings up to 12800, which means you can not only photograph people standing in near darkness, you can also photograph what they're thinking about. (Just joking folks… don't get alarmed)
To keep noise under control and maintain optimum image quality at higher ISO ratings the EOS 50D allows you to choose from four levels of noise reduction – Standard, Weak, Strong, and None. The camera's DIGIC 4 image processor also features in-camera peripheral illumination correction, which can automatically smooth-over uneven blue skies and other large areas within an image that can benefit from smoother tonality. This feature, along with other image enhancing tools such as Auto Lighting Optimizer can also be performed post-exposure using Canon's Digital Photo Professional (DDP) software, which is included with every camera.
Image viewing has also been improved via a greatly enhanced 3" LCD that employs 920,000 pixels for breathtaking clarity. Canon also tweaked the Live View function by incorporating a 'Quick Mode AF', 'Live Mode AF', and 'Face Detection Live Mode AF' that can detect up to 35 individual faces within the camera's frame.
Other features of the Canon EOS 50D include an Integrated Cleaning System for preventing dust and other forms of airborne schmutz from gathering on the sensor's low-pass filter and a choice of two smaller RAW formats (sRAW1 and sRAW2) in addition to the 50D's standard RAW mode.
The Canon EOS 50D will be available in October as a body only, or in kit form with a Canon EF 28-135/3.5~5.6 IS USM zoom lens, which covers the field of view of a 44.8-216mm lens on a full-frame 35mm camera.
Publicado por Rafael Sánchez Cernuda en 10:21:00 a. m.